Nonvesicular GABA release due to reversal of the GABA transporter 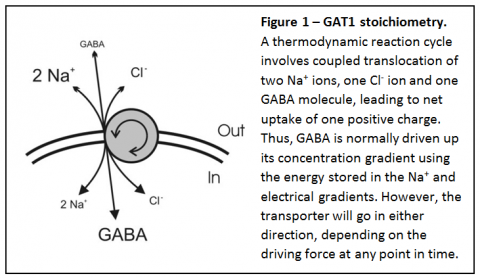 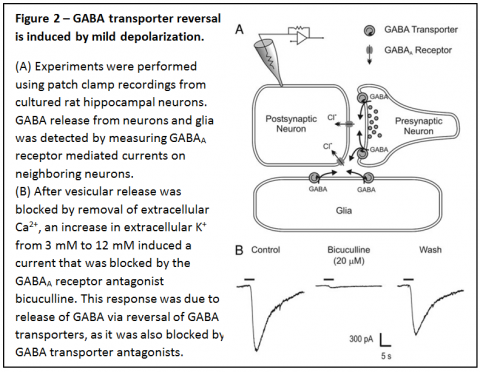 This carrier-mediated GABA release has been recognized to exist for many years, but the physiological relevance has been unclear.    Since the GABA transporter is electrogenic and sodium-dependent (Figure 1), thisnonvesicular form of GABA release can be induced by high intracellular sodium and     depolarization.

We have shown that GABA transporter reversal occurs surprisingly easily - in response to mild depolarization induced by an increase in extracellular K+ to as little as 6-12 mM (Figure 2).

There is normally an increase in extracellular K+ during a seizure. Along with the increase in intracellular Na+ and depolarization that also occur during seizures, it is expected that carrier-mediated GABA release would be greatest during seizures, and this would act to reduce excitability. The anticonvulsant vigabatrin inhibits GABA transaminase, the enzyme that metabolizes GABA. This leads to an increase in cytosolic [GABA], which would favor reversal of the GABA transporter. Indeed, we found that vigabatrin induces nonvesicular GABA release, which would inhibit seizures.

Role of the GABA transporter in tonic inhibition

In addition to the effect of vigabatrin in enhancing transporter reversal, this drug also induces a large tonic, GABA mediated inhibition of neurons (Fig 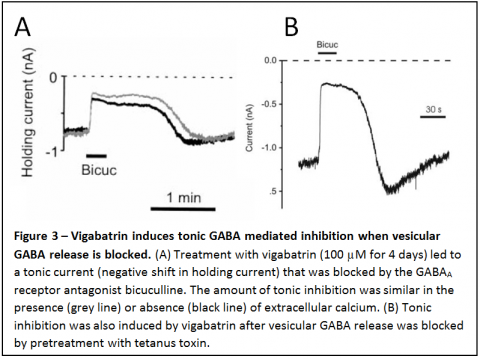 . 3). This effect of vigabatrin is very potent, with as little as 50 nM vigabatrin inducing significant tonic inhibition. It is also slow to develop (peaking after 3-4 days), consistent with slow accumulation of GABA in the cytosol.

If extracellular [GABA] is sufficiently high this would activate high affinity, extrasynaptic GABA receptors, leading to tonic inhibition. This type of tonic inhibition is now well recognized to play an important role in regulation of brain excitability. Thus, the increase in tonic inhibition induced by vigabatrin may well be the major reason why this drug prevents seizures. 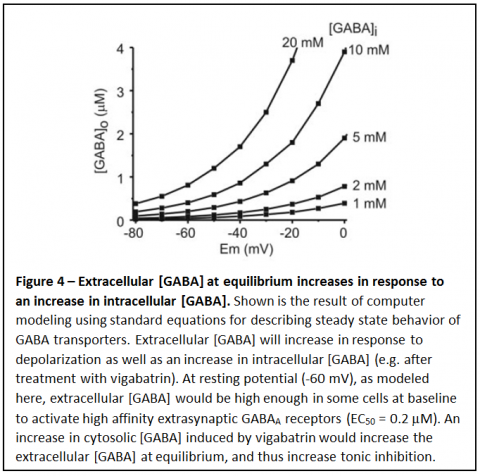 Neurotransmission can occur due to reversal of the GABA transporter

To measure the influence of ambient conditions on transport of GABA by GAT1 we performed experiments in which one set of Chinese Hamster Ovary (CHO) cells was transfected with GAT1, the neuronal form of the GABA transporter (Figure 5A). A separate set of CHO cells was transfected with the a6, b3 and d subunits of the GABAA receptor, a high affinity combination found in some extrasynaptic sites. The GAT1 expressing CHO cells simulated GABAergic neurons, and contained physiological levels of cytosolic sodium and GABA, and the CHO cells expressing GABA receptors were used as “sniffer cells” to detect GABA release. These experiments demonstrated that depolarization over a physiological range caused reversal of GAT1 and the GABA release that occurred induced a substantial response in the sniffer cells (Figure 5B). 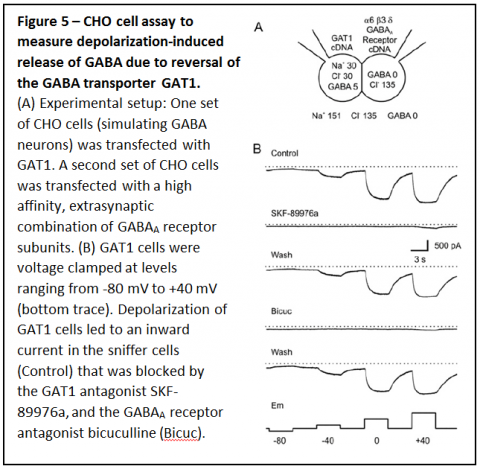 To determine whether GAT1 can reverse fast enough for GABA release to occur during an action potential, membrane potential of CHO cells expressing GAT1 cells was changed rapidly (Figure 6A & B).

Pulses lasting only 10 ms resulted in substantial GABA release that was enough to induce large responses in sniffer cells. When GAT1 expressing CHO cells were depolarized with a waveform that simulated neuronal action potentials (Figure 6C), GAT1 reversal was rapid enough that it led to large amounts of GABA release. 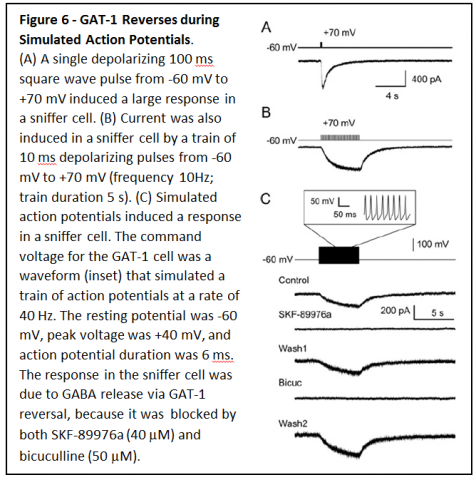 Based on these results, it is predicted that GAT1 reversal should occur during action potentials in GABAergic neurons, and should allow nonvesicular neurotransmission between neurons. To determine whether that occurs, patch clamp recordings were made from hippocampal neurons in primary cell culture.

Similar results were also obtained when vesicle fusion was blocked by tetanus toxin and when neurotransmitter loading of vesicles was blocked by concanamycin A. 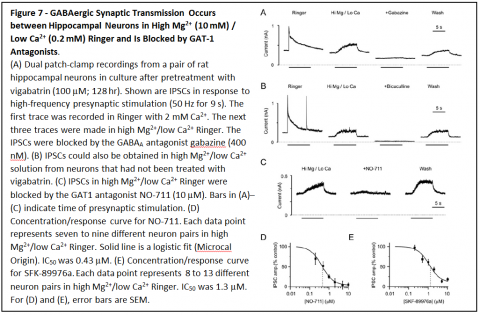