Medullary serotonergic neurons are sensors for CO2 and pH.

Blood pH is tightly controlled, because even small changes in pH can be fatal. One of the major mechanisms for this pH regulation is via regulation of carbon dioxide levels, since CO2 and pH are in equilibrium through the chemical reaction H2O + CO2 » H+ + HCO3-.

To regulate CO2, there are neurons in the brain called central respiratory chemoreceptors that monitor CO2 and alter the rate and depth of lung ventilation. Recently, we have shown that neurons in the medulla that produce serotonin (serotonergic neurons) have properties expected of central respiratory chemoreceptors. For example, they are strongly stimulated by an increase in CO2 via the resulting decrease in pH (Figure 1 and 2). 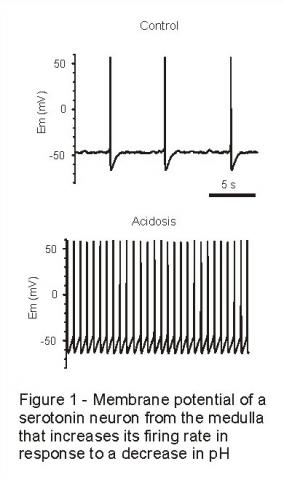 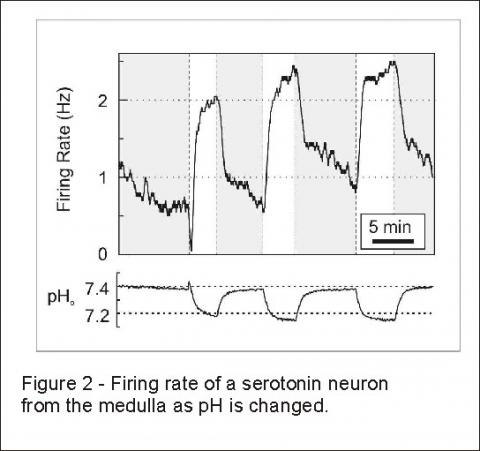 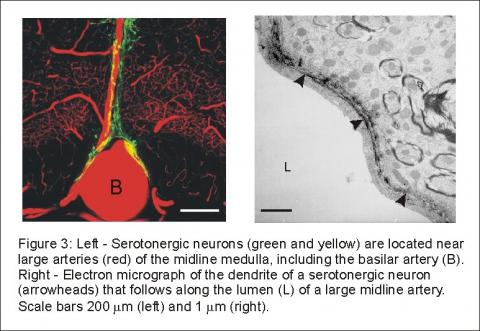 There is now a variety of data from other laboratories using in vivo experiments that support a role of medullary serotonergic neurons as central respiratory chemoreceptors.

Our current work is aimed at studying the properties of serotonergic neurons to understand how they carry out their function as central chemoreceptors. To define these properties and their mechanisms we are using a combination of patch clamp recordings from brain slices and tissue culture, multielectrode array recordings, intracellular pH imaging, immunohistochemistry, and molecular biology. Our major goals are to define the mechanisms of pH chemosensitivity and how serotonergic neurons modulate downstream neurons in response to acidosis.

Midbrain serotonergic neurons are also sensors for CO2 and pH 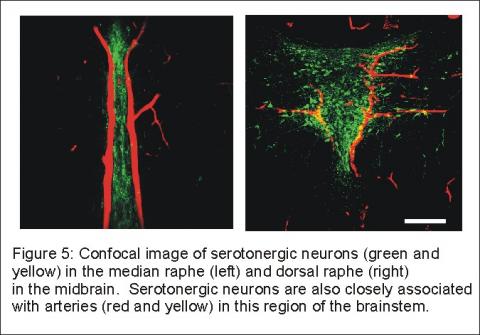 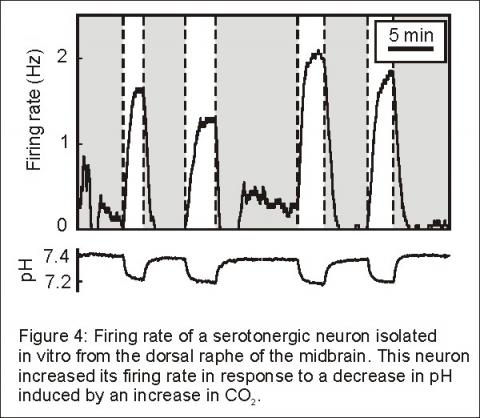 Do serotonergic neurons throughout the brainstem share a role as CO2 / pH sensors? 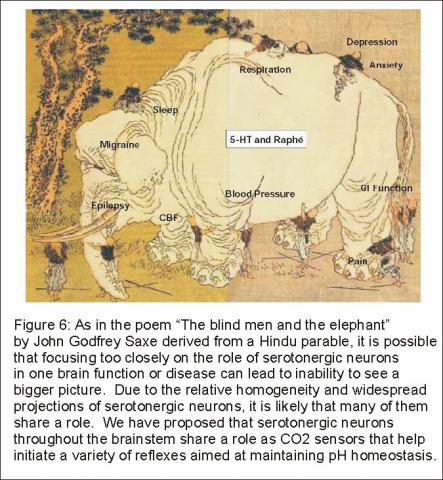 There are many human diseases that are linked to serotonin. These include sleep apnea, panic disorder, epilepsy, migraine, and SIDS. Interestingly, each of these disorders are also affected by CO2, or related to defects in CO2 chemoreception. Perhaps the most exciting link is with SIDS (sudden infant death syndrome). Scientists at Harvard and Dartmouth led by Hannah Kinney, have shown that there are abnormalities in the serotonin system of infants who have died of SIDS. A leading hypothesis for the pathophysiology of SIDS has been that there are maturational defects of the brainstem in these infants that lead to abnormalities of CO2 chemoreception, breathing and arousal. This is interesting, because if serotonergic neurons are central chemoreceptor neurons that induce arousal and increased breathing, a defect in them would be expected to cause precisely the problem thought to occur in SIDS victims, i.e., blunting of the reflex hyperventilation and arousal that occurs in response to hypercapnia during sleep. We have initiated a collaboration with these scientists to better understand the mechanisms by which a defect in serotonergic neurons might lead to SIDS.

The overall goal of our lab is to determine the mechanisms by which serotonergic neurons sense changes in CO2, and how their downstream effects contribute to control of pH. Defining the mechanisms of central respiratory chemoreception may lead to specific treatments for diseases in which respiratory chemoreception is abnormal and provide a better understanding of how CO2 and pH affect CNS function.